Our Mission: To use mass media to help the people of New England enter into and develop a personal relationship with Jesus Christ. 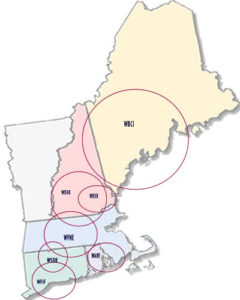 President Bill Blount purchased WARV in Rhode Island in 1978, a year after leaving Bob Jones University with a B.A. in Radio & Television Production and post-graduate work in Business studies. He purchased WARV from a husband and wife team, and worked for them for a year before taking ownership. In 1982, he purchased WFIF in Connecticut from a group of investors. In 1990, he purchased the construction permit for WVNE from four Christian businessmen in Worcester, and built the station “from scratch.” Then in 1995 Bill was able to purchase rock station WBCI in Maine, converting the programming to Christian talk and teaching in May of that year. In 2000, Bill purchased WDER, a religious station in New Hampshire and in 2011, purchased WSDK in Hartford, Connecticut.

In the “early years” of WARV, Life Changing Radio President, Bill Blount, used to host a morning show on the station.  He used to use a seagull sound effect to pretend he had a seagull as a pet and occasional squawking “co-host.”  This fabric seagull was given to Bill to represent his feathered morning friend.  Of humor, one foggy morning, Bill said that “Gerty” made a “hard landing” on the roof flying in and hurt her leg.  Immediately, a listener called in to tell Bill to get her to the Vet right away.  Humorously, Bill informed the caller that “Gerty” was just an audio sound effect and not real!  Just one of the “early year” stories from our history!